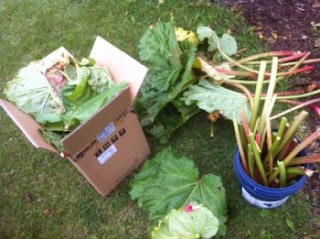 Towards the end of autumn I harvested some late growing rhubarb. Some of it was regular sized, but most of the stems were thick and fibrous. When I cut those ones in half, they even had a tiny hollow inside. I didn't think the thicker stems would be good to cook with, even if I chopped it up and froze it. Many people don't bother saving overgrown rhubarb because its too tough and not very flavorful, and I agree. So I didn't chop and freeze this batch- I made it into syrup.

The idea to make rhubarb syrup occurred to me last year while I was making kefir batches. I like sour flavours, so I was making a lot of lemonade ones. At one point lemons were either too expensive, too impractical, or too painful on my hands to keep using regularly. I was also making rhubarb jam and wondered why rhubarb flavouring wasn't more of a thing in candies and such. So I tasted the rhubarb jam juice- was it ever sour and tasty! So my next batch of stems became a syruping experiment. I don't follow a recipe to make this- it's pretty low key. You can make it with any amount of rhubarb you have, either fresh or chopped up frozen pieces.

Wash the stems and cut off the ends and bruises. You don't need to peel the tough outer fibers off.
Chop up your rhubarb pieces. I cut mine small in this picture because I wanted it all to fit in one pot instead of two. The size doesn't matter for cook-down purposes, as long as they're mostly uniform. 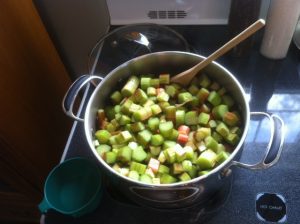 Add enough water so that the bottom of your pot is covered. This pot took one cup's worth. (If you're trying this with pre-frozen pieces, watch it cook down first before seeing if you should add any more water.)
Cover and simmer on medium-low, stirring occasionally. Add more water if the bubbles spit too much at you.
The individual rhubarb piece size doesn't matter because when it's cooking down each piece "melts" into brown mushiness. When you can't tell the pieces apart and you have a simmering slurry, it's done.
Let it cool enough so it stops spitting and doesn't burn you. Strain it through an easily scrubbable steamer or colander. (The rhubarb strings will plug up a fine mesh strainer.) You can also pour it into strainer bags or cheesecloth. 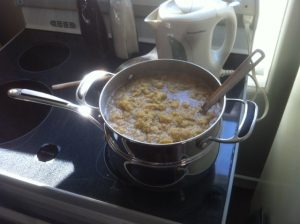 I give it a couple stirs to unplug the rhubarb strings from the colander holes, but not very forcefully, because I don't want the strings to get through into the syrup. Then I ignore it and let it strain itself for a few hours. Once its cool to the touch you can press on it with your hands (or squeeze the cheesecloth) to help it release more liquid. 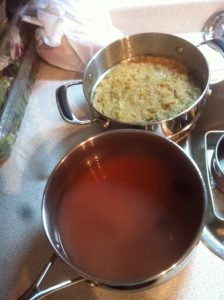 Now you've got rhubarb syrup! It comes out a lovely bright pink color. It's not sweet like a syrup but is just as viscous.
Each batch will have a different level of sour, depending on the plants and how much water you added during the cooking process. I use it mostly for smoothies and kefirs, and keep it in the freezer in containers or jars.
Labels: canning preserving Rhubarb syrup